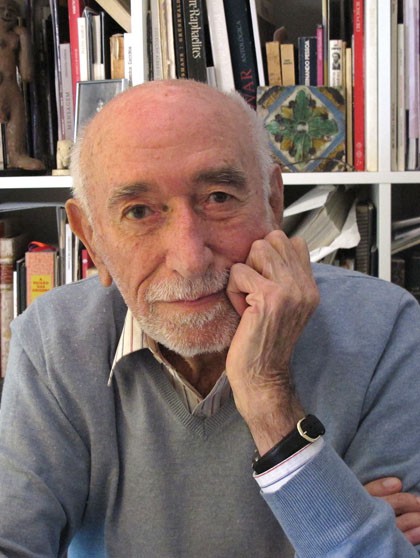 The second CPS screen print edition, in 1985, was from Cruzeiro Seixas. Since then, we have developed a friendly collaboration with the most edited author by CPS. I confess my great affection and personal admiration for the “Surrealism Prince”, for his idea of Liberty and for the possibility of including the Dream in each one’s precious life’s horizon. For his transforming capacity of the Real, praising it (Surreal). For his artistic presence, contemporary to all periods, more ethical than aesthetical. This was the pretext for this brief conversation.

During these 30 years you have had thousands of works shared in the collections of CPS members. In what way does living together with a work of art contribute to a more cultured society?

That is an answer that only a complete library would be able to answer! There is a famous quote from Almada that says “it is all said, now we just have to do it!” and, to a great extent, that is true. I always hope that by talking to people they cling to my passion for the art. I think that is both good to them and to me, because I don´t see, within the current life scheme, any other way to be guided to an idea of complete freedom and satisfaction, which is desirable for Humankind.

The relevance of your Graphic Work and the Art Multiple is reinforced by a raisonné catalogue, in preparation due to be out soon. What is its importance for a surrealist master?

For me it has a life or death significance. Without it I wouldn’t have lived. I’ve always said that what I did was my own breath. It was not about creating works of art, it was about breathing! This country is so narrow in space, it has a terrible frontier, we are stuck between Spain and the sea, and without having the resource to a larger space, to the natural space where Humankind breathes normally. This implies a liberty that we do not have, we don’t know how to have, in this country. We have come out of a dictatorship experience, but do we actually know how to use the liberty that democracy has given us, after April 25? I don’t think so!

All your work, in terms of gallery and editing, has been very interesting to a point that it reached the extreme of almost being unique! In this country there are less and less people doing such things…

From all the processes, collages, paintings, sculptures, etc., drawing occupies a major part of your work. What do you have to say to this?

Drawing was the only thing I have never learnt! I failed 2 years at drawing at the António Arroio School. This is actually amusing. Sometimes, teachers needed to fail as well. Now it is funny that from everything I have done, what strikes the core of knowledge and the depth of Humankind the most is drawing with feather. The rest was mainly speaking about love.

Your work is surprising for the marked identity, the immensity, diversity and the uninterrupted continuity. These two very special screen prints now presented are a result of collages from the screen print proofing of your former works. Is the surrealistic creativity inexhaustible?

Not inexhaustible, that is a term that leaves me a bit diminished, I get scared… I was not born to be victorious; on the contrary, I was born to be amiss. Once someone said, ironically, that there were too many wings in the things I did, and I have answered that my wings were not meant to fly, they were meant to fall. Those are the wings that I know how to use, those violently fallen wings on Earth, always… climbing a few metres and collapsing, climbing a few metres and collapsing. And that is the destiny of Humankind, most times that is a certainty because Humankind is never going to climb eternally.

Until the Dadaists, people saw the paintings with arms, hands, and things which imitated reality, and that resulted in failure, because reality is something and what the painter wants to do is something else. It is necessary for the painter to put something in the arm or the hand that he is going to draw that is much more than the sketch or the ink. And that is very difficult to do, to make Art vibrate passionately. Art is meant to be passionate; if it is not passionate it is not art!

Regardless of your age, I see you as a young man: you always have an idea for the future. What projects would you still like to do?

There are still exhibitions to be done, systematically, in a historic perspective, such as a great retrospective, so that I can assess myself, if that was worth it, if it was worth the effort. I don’t really know if what I have done has some meaning, and in a great retrospective one would see if the things done in small papers, with holes, in squared or ruled paper were worth it, and if they have a meaning towards life.

Young people are those to whom the Graphic work makes more sense due to the values it encompasses. What would you like to convey to young collectors?

Youth is one of the most beautiful things of our experience. I find the experience of youth much more passionate than that of old age. Today I am 95 years old and I am very tired and I do not create half of what I would like to create. As for the young people, they are all the hope for the world, one has to reinforce that hope and expect that they reinforce it themselves, because they are going to build tomorrow’s world and there is a lot to do. Anyway, I would like to be a role model and a hope for all of them. That is what I would like to be.